The Web Goes Dark Against #SOPA 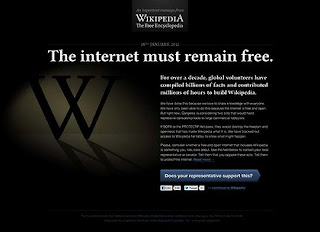 Wikipedia staged a 24 hour blackout of its articles joining other web sites in a protest against SOPA, a US legislation aimed at shutting down websites that share pirated movies and other content

Reddit shut down for 12 hours, Google blacked out the logo in its home page, and Craigslist took a middle route by changing its home pages to a black screen.

Mark Zuckerberg of Facebook made an announcement yesterday saying this is not the way it should be on the web.

I personally, think that SOPA is not the right way to control content on the web- it should not be passed.
Posted by Moe Kamal, Jr. at 5:33 AM